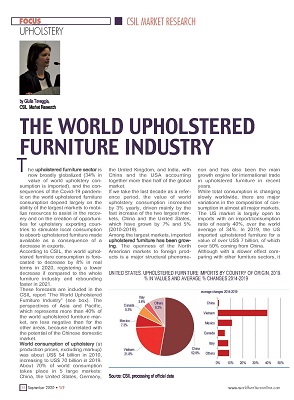 The world upholstered furniture consumption is forecasted to decrease by 8% in real terms in 2020, according to CSIL, registering a lower decrease if compared to the whole furniture industry and rebounding faster in 2021.

The perspectives of Asia and Pacific, which represent more than 40% of the world upholstered furniture market, are less negative than for the other areas because correlated with the potential of the Chinese domestic market.

World consumption of upholstery (at production prices, excluding markup) was about US$ 54 billion in 2010, increasing to US$ 70 billion in 2019.

About 70% of world consumption takes place in 5 large markets: China, the United States, Germany, the United Kingdom, and India, with China and the USA accounting together more than half of the global market.

If we take the last decade as a reference period, the value of world upholstery consumption increased by 3% yearly, driven mainly by the fast increase of the two largest markets, China and the United States, which have grown by 7% and 5% (2010-2019).

Among the largest markets, imported upholstered furniture has been growing.

The openness of the North American markets to foreign products is a major structural phenomenon and has also been the main growth engine for international trade in upholstered furniture in recent years. While total consumption is changing slowly worldwide, there are major variations in the composition of consumption in almost all major markets.

The US market is largely open to imports with an import/consumption ratio of nearly 40%, over the world average of 34%. In 2019, the US imported upholstered furniture for a value of over US$ 7 billion, of which over 50% coming from China. Although with a slower effect comparing with other furniture sectors, it is worth noting that, recent trade tensions between the US and China are impacting the trade flows between these two countries and are bolstering the role of other countries, such as Vietnam and Mexico.

LEADING US AND CHINESE MANUFACTURERS EXPAND TO VIETNAM AND MEXICO

Both leading US and Chinese upholstered furniture manufacturers made important investments in expanding their presence in those countries with the aim to satisfy the US market directly.

In this regards it is worth mentioning Ashley Furniture, the world's largest upholstery manufacturer, which operates six manufacturing plants (8,700 employees) in Vietnam through the company Wanek Furniture and exports entirely to the mother company in the USA.

During 2020 Kuka made important investments both in Vietnam with the construction of a new manufacturing facility producing 450,000 sofas per year and Mexico, where the company established a new facility focused on special order stationary upholstery for the North American market. While the facility will produce fabric upholstery only to start, leather production should come online by 2021.