The report covers both kitchen furniture (excluding the sales of cabinets only) and the built-in appliances sold through this channel.

Kitchen furniture imports and exports in the CE European countries considered, are broken down by country and by geographical area of destination/origin. The time frame considered is 2012-2017. The main macroeconomic variables necessary to analyse the performance of the sector for the last six years are also included.

Kitchen furniture production is broken down according to:

Information on the competitive system include the analysis of the leading local and foreign players (especially from Italy and Germany) present in each price range and in each CE European country considered. Detailed tables show sales data and market shares for the leading kitchen furniture companies, and short profiles of the major players in the kitchen furniture industry are also available.

An address list of the major CE European kitchen furniture companies mentioned in the Report is included. 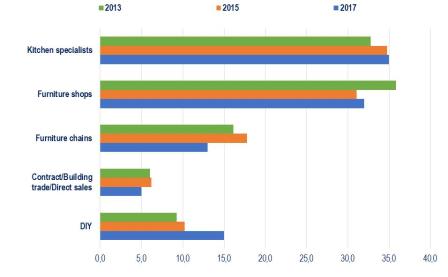 During the 2012-2017 period, the kitchen furniture market in Central-Eastern Europe increased at an yearly average rate of 4.5% in value and 2.7% in quantity. Higher the growth rate for the Imports (mainly from Italy and Germany), about 7.6% per year. Imports cover a 17% market share in value. Approximately 7,000 kitchens are sold in CE Europe in a price segment ranging from 5,000 to 7,000 Eur (factory price, excluding built-in appliances). To be noticed a fast decrease of solid surface materials, while the share for engineered stone products is going up. Laminated worktop is over 80% and the wooden solutions shows a decrease. Sales are decreasing among furniture stores and furniture chains, going up for kitchen specialists and DIY chains.

Abstract of Table of Contents

Please login to download the full table of contents - [pdf]

Sometimes the information people are looking for is not available in an off the shelf market research publication. If this is the case for you, then you should consider a custom research job